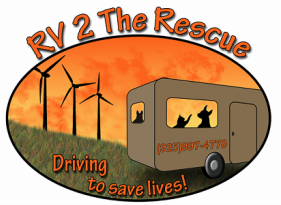 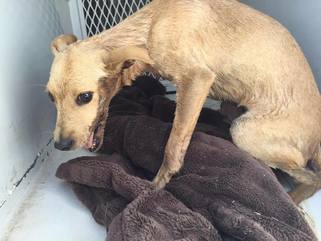 Jennie Adams, a volunteer rescue coordinator for Delano Animal Shelter was notified that a small dog (Whippet mix) was hit by a car and found in a mud puddle by the roadside dehydrated and in pain.  The sweet little pup was turned into the Delano animal shelter but no one came forward to claim their dog.   Other volunteers were able to obtain help from a local veterinarian who stabilized her jaw by wiring it partially open. The seriousness of her injury required immediate attention.  A massive effort went into effect to find a rescue that would take the injured dog. This is a monumental task that requires an enormous amount of time and effort from many volunteers.

Luckily, Cheryl Babcock, founder of Big Dog Rescue, Petaluma made arrangements for Cricket to be evaluated and treated at UC Davis animal hospital.  It is a well-known teaching hospital for aspiring veterinarians.  Meanwhile Jennie continued her search for a rescue organization who would be willing to take responsibility for Cricket and find her a good home. Pound Puppy Rescue, Redwood City, Ca. rose to the challenge.  They raised funds for the surgeries she will need to fix her jaw.  Cricket had a temporary foster volunteer in Sacramento, close to UC Davis, because she would require follow up appointments and possibly more surgeries.

RV 2 The Rescue, based in Rio Vista, Ca., a nonprofit rescue transport organization, arranged for Cricket to fly from Delano to Davis, Ca and then provided transportation from the airport to the university animal hospital.   RV2 The Rescue is often called upon to provide quick emergency response medical flights for animals in critical situations.

UC Davis neurology department assessed her and said she was hit hard in the face by a car.  Amazingly, her prognosis is good. Her jaw was badly misaligned, so she could not shut her jaw.  After 3 days of antibiotics and IV fluids for dehydration, she was transferred to the Dentistry Department for surgery.  They removed parts of both jaws and shaved some joints and removed some broken baby teeth.  A soft muzzle supported the jaw and was removed for meals and water.  After a week of heavy pain meds and a lot of sleep, she began to recover her spunk and tail wags.  August 10, her stitches were removed and her checkup showed everything was healing well.

Through all this, she never lost her spirit.  She is a fighter.  Cricket will soon be available for adoption thru Pound Puppy Rescue in Redwood City, Ca.

RV 2 The Rescue & Big Dog Rescue save the world again! 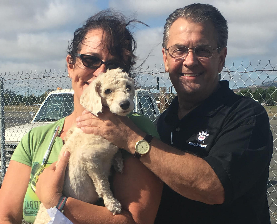 Another Happy Ending in the books for a neglected poodle mix with a broken leg.  RV 2 The Rescue pilots Mike Henry and Tiffani Shiro teamed up to fly a Cessna 172 from Sacramento to Delano to pick up a little poodle dog that suffered a broken leg.  Cheryl Babcock, founder of Big Dog Rescue agreed to take the little dog into her rescue.  They will take her to UC Davis where she will receive the care that is needed to repair her broken leg. She will soon be available for adoption through Big Dog Rescue.

Bakersfield, CA.  A little Chihuahua mix was turned into the Bakersfield area animal shelter with a badly swollen foot.  It appeared the injury from the elbow down had been that way for a very long time.

Laura Vega, a shelter volunteer offered to take Watson home while they searched for a rescue “angel”  He was constantly gnawing on his foot and it started to swell to twice the normal size.  It was imperative to locate a rescue that would take him and provide the treatment he needed.

Watson’s Angel….. Big Dog Rescue offered to help him and made arrangements for him to be seen at UC Davis Veterinary Hospital.  RV2TheRescue sprang into action and began searching for a rescue pilot who could fly him from Bakersfield to University Airport at Davis, Ca.  RV2The Rescue met Watson’s flight and drove him to the hospital.

The staff at Davis said if he had not received immediate care he would have died from his infection.  After some intensive IV fluids to fight the infection, it was determined he would need to have his leg amputated.

After Watson was well enough to leave the hospital, he went into foster care for rehab and recovery.  We are happy to report Watson has been adopted!  Thank you Big Dog Rescue.